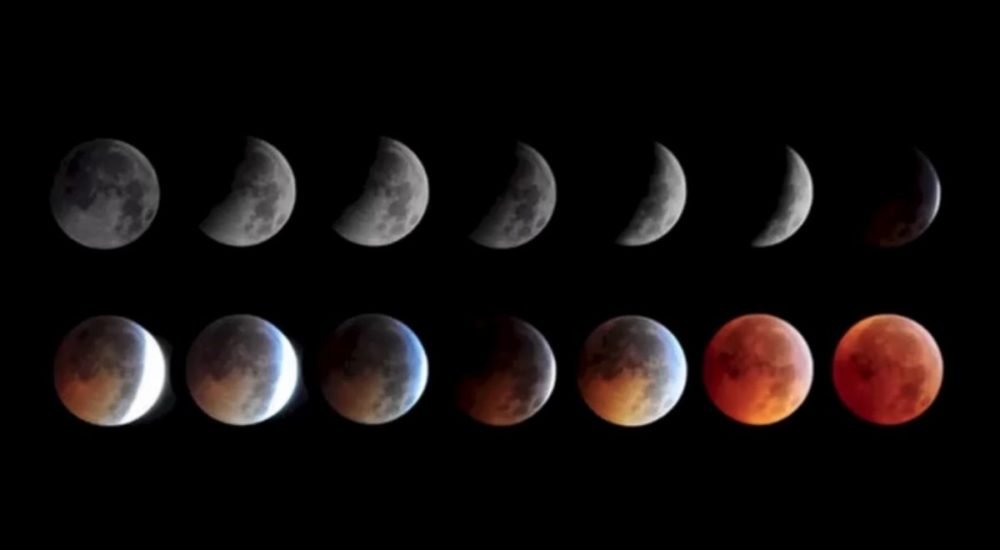 Once in a blue moon, the moon also gets red!

When one heavenly body — such as the sun or the moon — moves into the shadow of other bodies, we get a beautiful show in the sky known as an Eclipse. When the moon travels in front of the sun, it sheds its shadow on the Earth. This causes a solar eclipse. And when Earth gets in between the sun and the moon and casts its shadow over the moon we get a lunar eclipse.

The Moon is a cool, rocky body of about 2,160 miles (3,476 km) in diameter. It doesn’t have its own light but shines by reflecting the sunlight from its surface. The Moon makes one revolution around the Earth once every 29 and a half days. As it orbits our planet, the changing position of the Moon with respect to the Sun causes our natural satellite, Moon, to go through a series of phases:

During a Full moon, the moon rises at sunset and is visible all night. At the end of the night, the Full Moon sets with the rising Sun.  During a full moon only, we get a LUNAR ECLIPSE as the moon is opposite to the sun and is blocked by the shadow of the Earth. When this happens, the Moon turns red, earning it the nickname of Blood Moon. This is because Earth’s atmosphere bends sunlight and only red light reaches Moon’s surface.

Why don’t we have a lunar eclipse every month?

You might be wondering why we don’t we get a lunar eclipse every month as the moon orbits Earth in 29 and a half days. It’s true that the moon orbits the Earth every month, but it doesn’t always fall behind the  Earth’s shadow. The moon’s orbit around Earth is tilted at an angle of  5ocompared to Earth’s orbit around the sun. The moon can be behind Earth but still get the light from the sun.

A lunar eclipse can only occur at Full Moon, and only if the Moon passes through some portion of Earth’s shadow. The shadow is mainly composed of two cone-shaped components, one packed inside the other. The outer one is known as the penumbral shadow. It is a zone where the Earth blocks some part but not all of the Sun’s rays from reaching the Moon. The inner shadow is known as umbral shadow. It is a region where the Earth blocks all direct sunlight from reaching the Moon. As the moon moves to different shadow region of the earth, we get different types of the eclipse:

1.Penumbral Lunar Eclipse: A penumbral lunar eclipse happens when the Moon travels through the faint penumbral portion of Earth’s shadow.

2. Partial Lunar Eclipse: A partial lunar eclipse can be observed when only part of the Moon’s surface is covered by Earth’s umbral shadow.

Four lunar eclipses will appear in the year 2020. They will all be penumbral eclipses, which means the moon’s surface will appear to turn a darker silver color for a few hours. Weather permitting, people across most locations on our planet will catch at least one of the lunar eclipses falling on Jan. 10-11, June 5-6, July 4-5, and Nov. 29-30.

Almost everyone on the dar/night side of Earth can see a total eclipse of the Moon. Because of this, most people have higher chances of seeing a total lunar eclipse than a total solar eclipse, even though both occur at similar intervals.

So be ready to observe this beautiful phenomenon!